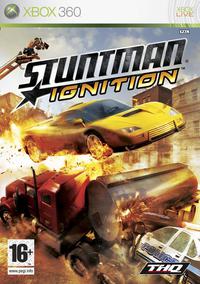 Stuntman Ignition
Plunge into the adrenaline-fueled role of a Hollywood stunt driver in Stuntman: Ignition, and master the most breathtaking, death-defying vehicle-based stunts ever filmed. As the newest stuntman in Hollywood, you must rise to stardom by combining reckless maneuvering with perfect execution to unlock big-budget blockbusters and lucrative commercial deals. Create movie-magic in 6 uniquely-themed films on 36 different stunt runs with over 25 vehicles, or take the action online to challenge rival stuntman in the ultimate backlot showdown.

- You are the Stuntman ? Feel the rush of pulling off the most breathtaking, death-defying stunts
ever filmed
- Intense Driving Action ? Perfectly execute a series of dangerous, high-speed vehicle stunts
through intense, precision driving
- Build Your Career ? Amp up the action by improvising reckless maneuvers during movie stunt
runs to unlock bigger-budget movies and commercial jobs
- Online Multiplayer ? Steal stunts from rival stuntmen as you battle on the film sets or through
custom built back-lot multiplayer arenas
- Stunt Constructor ? Devise your own insane stunt runs and challenge other stuntmen online to
beat you at your own game
- Unique Vehicles ? Master your control of more than 25 unique vehicles, including exotic sports
cars, motorcycles and hovercraft
- Welcome to Hollywood ? Showcase your skills in a wide variety of big-budget action films,
commercial shoots and tournaments.
Schrijf een review