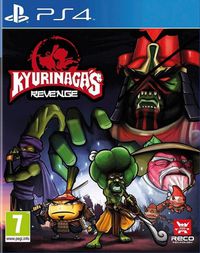 Kyurinaga's Revenge is a 2D-based game with lots of platforming, action and puzzles.

Kyurinaga's war machine took a decisive blow right after our heroes blew up The Forge, the Shogun's main source of political power.

Beaten but not defeated, Kyurinaga managed to escape with the remains of his army, swearing revenge on the two rebels who dared defy him.

Months after that, Kaoru and Broccoli are leading an improvised revolution for a better tomorrow against the Shogunate, alongside other rebels and deserted soldiers.

Battle alongside our two heroes: The samurai Kaoru Tamanegi and the street fighter Broccoli Joe! In this new adventure, they will have to overcome platforms levels, fights, bosses and more complicated puzzles. Timing and endurance will be the key to defeat evil permanently.